I’m very excited to share the premiere performance of my Concerto for Baritone Saxophone, performed by Taylor Huitema and Zhao Wang! A sincere thank you to Taylor and the 31 consortium members who commissioned this piece. It was such a pleasure to write so extensively for one of my favorite instruments. The piece is now available for purchase through Murphy Music Press!

Concerto for Baritone Saxophone is a three movement neoclassical work written in 2018. The three movements utilize traditional classical forms: the sonata, rounded binary, and rondo forms, respectively, and feature harmonies and melodic phrases similarly indicative of the classical era. The piece shows off the versatility and different personalities of the baritone saxophone, from mellow and pure lyricism to powerful and commanding aggression. The piece also explores the baritone saxophone’s different registers, employing a range from the lowest note on the instrument to the upper echelon of the altissimo register.

Though the piece is divided into three movements, several motives, themes, and harmonic progressions reappear throughout. The piece contains two five-note motifs that are introduced in succession as the baritone saxophone’s first statement of the opening cadenza. The first motif is an ascending arpeggio and the second motif is a step-wise mordent centering around one note. These motifs are used both melodically and accompanimentally and are applied to the various contexts of the different movements. The piece also features a principal harmonic progression, from the tonic (I or i) triad to the submediant (vi or VI) triad. This progression is similarly manipulated to fit different musical contexts and is used to create non-diatonic harmonies, bitonal polychords, and even dictate tonal centers of larger sections of the piece as a whole.

My new young band pieces Scorch and Pitch Black are now available for purchase and will be displayed this week at the Millennium Composers Initiative booth at Midwest Clinic! I’m very appreciate of all the band directors and colleagues who supported this consortium last year and provided invaluable feedback and advice as I was writing the two pieces. I’m already eager to write more music for young band!

I’m excited to share this recording of Violent Shadows, performed by Evan Clifton and Yu-Lien The at Evan’s WMU Seminar Music Camp recital this July!

There are still two weeks left to join the consortium Evan and I are organizing for a bass trombone and wind ensemble (grade 4) version of this piece! Band directors and bass trombonists are both welcome to join – There’s an option for band directors to have Evan come out to perform the solo with your ensemble. The buy-in is relatively cheap and the piece will be completed and sent out by the end of December, with performance exclusivity for all of 2020.

More information about the consortium can be found here.

It’s an absolute honor to have both of my saxophone quartets added to the UIL Prescribed Music List (or, I guess, Chris Evan Haas’ saxophone quartets 🤔)! Thank you to the band directors that recommended adding these pieces to the list and best of luck to the high school students in Texas who attempt to perform either piece at Solo and Ensemble!

Just finished and sent off this piece to Jordan VanHemert and the Holland Concert Jazz Orchestra! It was such a pleasure to write this piece and I can’t wait to attend the premiere this October!! 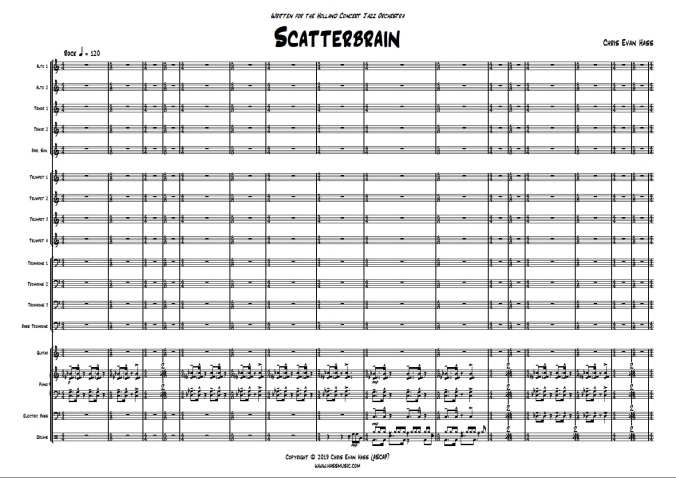